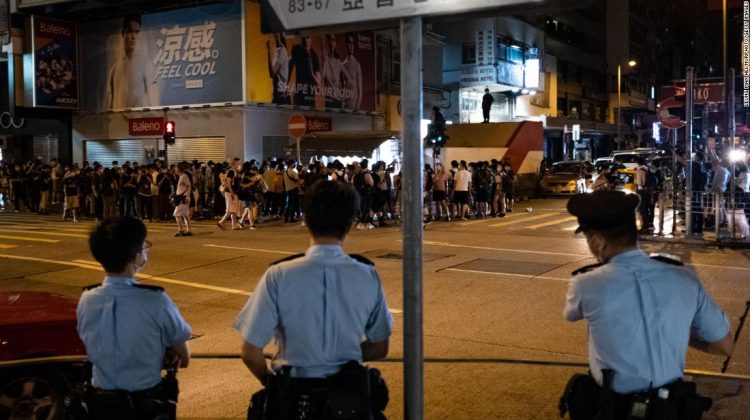 Hong Kong authorities sought to distance the newspaper’s closure from what it called “normal journalistic work,” and asserted that the rebellious, pro-democracy publication threatened national security.

Beijing responded on Friday that Biden’s comments were “groundless,” and urged the United States not to interfere in China’s “internal affairs.”

The move was “a shot across the bow and a reminder of the ambiguity of the national security law,” said Tara Joseph, president of the American Chamber of Commerce in Hong Kong. The law bans any activity Beijing deems to constitute sedition, secession and subversion, and allows Chinese state security to operate in the territory.

“It’s not just the closure of Apple Daily,” she told CNN Business. “It’s the new normal, and the change that Hong Kong is going through from its era as a post-British colony to an era where it is, more and more, part and parcel of China.”

The government has pushed back on those concerns. Asked for comment, a representative for Hong Kong Commerce Secretary Edward Yau referred CNN Business to previous remarks by the city’s leader, Carrie Lam.

“Don’t try to accuse the Hong Kong authorities for using the national security law as a tool to suppress the media or to stifle the freedom of expression,” Lam said at a press conference Tuesday.

Hong Kong has for decades been a critical hub for foreign businesses looking to engage with China. While Beijing largely regulates how overseas companies do business in the mainland, Hong Kong offered them the ability to operate without heavy restrictions on investment and other operations.

Media organizations have traditionally had greater freedom in Hong Kong than in the mainland, where Beijing’s state-run publications are omnipresent and where foreign outlets have strict rules to follow on how they employ journalists.
Tech firms, too, face major roadblocks in mainland China, with companies like Google effectively cut out altogether.
But Beijing has been moving aggressively to bring Hong Kong into line since 2019, when mass pro-democracy demonstrations broke out across the city. The national security law was the most obvious symbol of that tightening, raising questions about the city’s future as an international business center — particularly for media or tech companies that deal with delicate or contentious information.

“If you have sensitive data, and if you don’t want that sooner or later the Hong Kong police is standing in front of your door, take your sensitive data out of Hong Kong,” said Stefan Schmierer, managing partner at Ravenscroft & Schmierer, a Hong Kong-based law firm that advises international companies.

Some firms have already reduced their presence in Hong Kong because of the political upheaval. Last summer, The New York Times moved its digital news operation for Asia from Hong Kong to Seoul, citing the potential impact of the security law. Investing advice website Motley Fool and TikTok also pulled out.
Big Tech players have also expressed reservations. Last July, Facebook (FB), Google (GOOGL) and Twitter (TWTR) said that they would pause the review of requests for user data from the city’s government.

Self censorship has become more apparent, too. Last year, the German Chamber of Commerce wanted to host a seminar in Hong Kong on the national security law, but couldn’t find any law firms willing to participate, according to Schmierer. The chamber did not immediately respond to a request for comment.

Kevin Lai, chief economist for Asia excluding Japan at Daiwa Capital Markets, said he had also noticed a shift among fellow analysts and economists, adding that many have been “more quiet than in the past.”

“There may have been some self censorship,” he said.

Security for some, unease for others

Schmierer said he didn’t expect the growing clampdown to affect everybody, adding that “it’s not like Beijing is going to kill the business of Hong Kong.”

“If you are buying some machines in China, and selling it to the United States, where is the problem with [the] national security law?” he added.

Frederik Gollob, chair of the European Chamber of Commerce in Hong Kong, echoed that sentiment.

While “in some sectors it has become more political … I don’t believe you can say this for all industries and sectors,” he said.

Still, the general unease hasn’t been limited to media and tech. In recent months, a sense of apprehension has fallen over the city, with various institutions finding themselves thrust into the spotlight.

HSBC said at the time that it had “to abide by the laws of the jurisdiction in which we operate.”

But the incident led to a furore among foreign politicians, and HSBC CEO Noel Quinn was summoned to appear before British lawmakers for questioning in January.

The bank has continued to experience tension in Hong Kong, its biggest market. This week, for example, the bank was forced to apologize to customers in the city after confusion over a reported change to its terms of service.

A notice posted by the lender, which has since been revised, stated that it “may not be authorized” to provide Hong Kong customers access to online or mobile banking outside the city, leading to a public outcry about how that would restrict customers and damage its status as an international finance hub.

HSBC later clarified that there was “no plan for any amendment of the services.”

“HSBC Hong Kong customers can continue to access banking services through online banking and mobile banking outside of [the city],” it said in a statement. “We apologize for any inconvenience caused.”

In some ways, “we have had a perfect storm over the last few years,” said Joseph, the AmCham president.

Schmierer said that Hong Kong has been suffering a “triple blow” of problems, from the historic mass protests in 2019 to the coronavirus pandemic and now fallout over the national security law.

The government has also faced mounting criticism over the city’s largely closed borders and strict quarantine rules, which have made international travel almost impossible for many people.

That has added to fears of a “brain drain,” according to Gollob.

“I am worried about companies and people leaving at larger numbers, and probably not returning, due to the inability to move freely,” he said.

In some communities, the question has become more urgent. More than 40% of expats surveyed by the American Chamber of Commerce in Hong Kong said they were considering moving away from the city, the group said last month.

Gollob said that he was more concerned with the city’s reopening than political tensions.

“In some areas of the business community, [the mood] is certainly close to desperate,” he said.

“We have a big job in front of us to restore the image of Hong Kong to where we think it should be, and that’s, I think, at the moment, a pretty tough job to do.”