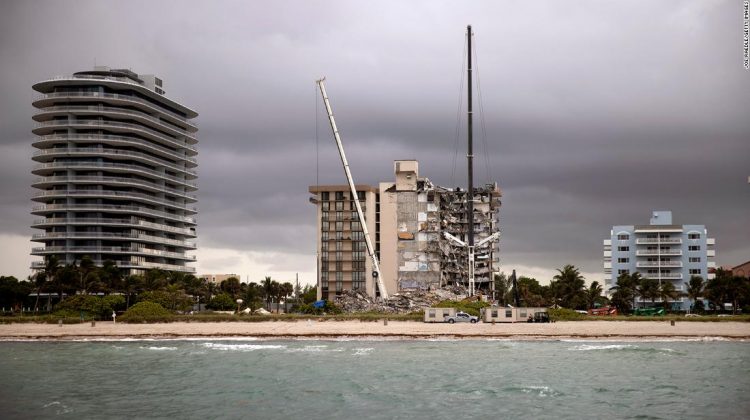 The lawsuit, filed Monday on behalf of Raysa Rodriguez, a resident who lives on the ninth floor of the Champlain Towers South building, as well as other residents similarly situated, states the condominium association had the duty to maintain the building in a safe condition and good working order.

“Despite the obvious duties required by Florida law, and this admitted duty of care by the Association’s Declaration and other governing documents, Defendant, through their own reckless and negligent conduct, caused a catastrophic deadly collapse of Champlain Towers South in Surfside,” the complaint alleges.

In filing the complaint, Rodriguez is seeking class action status to represent all of the people who were affected by the tragedy, and is asking the court to help preserve any materials so everyone who is to blame can be held responsible.

The plaintiff is seeking unspecified monetary damages and a jury trial, according to the complaint. This is the third lawsuit to be filed against the condo association.

CNN’s calls to the Champlain Towers South condominium association seeking comment on the lawsuit have not been returned.

“The board is already in the process of hiring an engineer to also try to figure out what happened, and they will be evaluating who’s responsible,” said attorney Donna DiMaggio Berger.

In the complaint, Rodriguez, who was asleep at the time of the collapse, recounts the shear devastation and the frantic race against time to evacuate once she realized part of the building was gone.

“I looked left to the North end of the building. A concrete column had pierced the hallway from floor to ceiling. I looked at the elevators. The elevator shafts were exposed, the doors were gone. I knocked on several neighbors’ doors, no answer. I run to the exit, open the doors that lead to the outside stairwell and saw the devastation. The beachside of Champlain had collapsed, pancaked. I screamed in horror,” Rodriguez stated in the complaint.

The complaint alleges that the defendant failed to address “major structural damages” outlined in a structural field survey report submitted to the defendant in 2018 by Morabito Consultants.

The suit further alleges that a variety of factors may have played a role in the collapse, which killed 11 people and left scores unaccounted for.

“Had Defendant and/or its contractors properly tested, inspected and evaluated the structural integrity of the building prior to commencing this work, it likely would not have occurred and become a contributing cause to the collapse,” states the complaint.

In an interview with CNN, one of Rodriguez’s attorney’s, Adam Schwartzbaum, argued the association has known that the building was in “critical” condition for years and that warning signs have been apparent for more than a decade.

Schwartzbaum said his grandparents lived at Champlain for 30 years until they moved out about 10 years ago. He said his grandmother used to complain that she would get water spots on her car in the garage, as if there was a leak. “She didn’t understand why there would be water on her car even though it was underground,” he said.

Referring to the 2018 report that identified cracked concrete and other damage, Schwartzbaum said, “Certainly for at least three years, there was a major red flag…sirens flashing, alerting the condo association of this danger.”

He said Rodriguez “recently” took a photograph that is included in the complaint that depicts a crack in the concrete above her parking space in the condo’s garage. He said Rodriguez shared the photo with the association “after a giant piece of concrete landed behind her car… to try to put them on notice of this.”

“Based on our investigation there were many warning signs more than 10 years ago, maybe even longer. These are not things that were just a few years ago,” he said.

The lawsuit accuses the condo association of negligence and breach of contract for failing to “exercise reasonable care in performing its management, maintenance and repair” of the Champlain Towers South condominium building. The “Defendant knew or should have known there was a significant and foreseeable risk of unreasonable harm to Plaintiff and class members and their property,” the complaint stated.