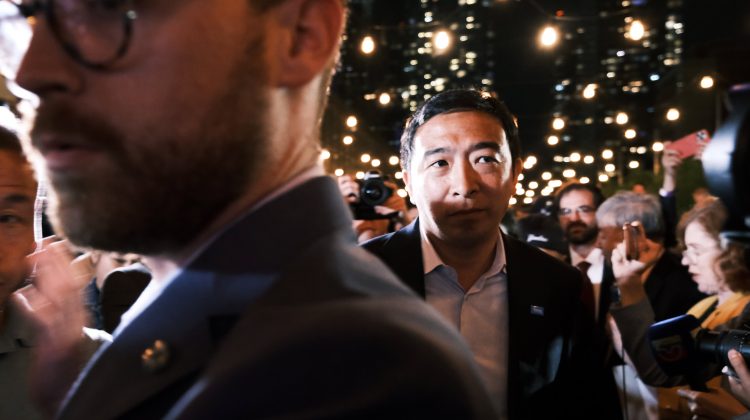 Mayoral candidate Andrew Yang greets supporters at a Manhattan hotel as he concedes in his campaign for mayor on June 22, 2021 in New York City.

Andrew Yang has conceded the race to replace New York City Mayor Bill de Blasio after it was clear to him that he won’t get enough votes, even with ranked choice voting and absentee ballots yet to be counted.

The business entrepreneur, who ran for president and never held a political office before, thanked his wife and his supporters at a Hell’s Kitchen hotel late Tuesday night, about two hours after polls closed, and said the campaign was amazing and that he learned a lot about the city.

Yang touted that he had more individual donors than any other campaign, talked about rising anti-Asian hate and how that played a role in his campaign.

“I am not going to be the mayor of New York City based upon the numbers that have come in tonight. I am conceding this race. Though we’re not sure who’s the next mayor is going to be, but whoever that person is, I will be very happy to work with them to improve the lives of the 8.3 million people who live in our great city and I encourage everyone here to do the same,” the 46-year-old Democrat said in his speech.

Yang said he doesn’t regret working with his competitor Kathryn Garcia, adding that he would do it all over again because he believes she should be the next mayor.

As of early Wednesday morning, Brooklyn Borough President Eric Adams appeared to take a fragile lead with Garcia and Maya Wiley not far behind.