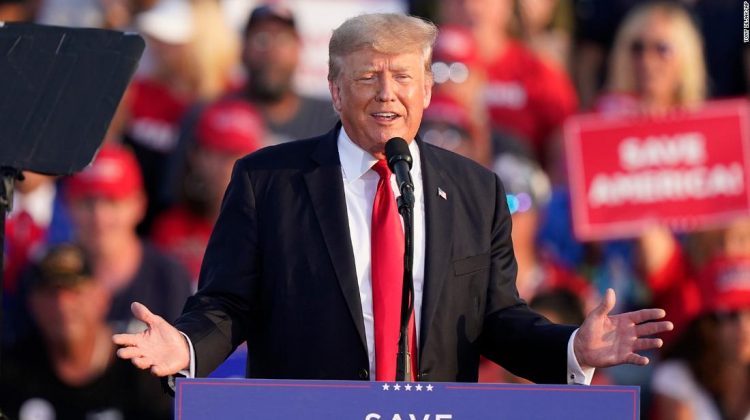 The confluence of dangers facing Trump would usually be sufficient to doom any presidential legacy and rupture any hopes of a political comeback in 2024. Yet the question is now what it always has been: Will a twice-impeached former President who has always kept one step ahead of the law and political gravity by disdaining truth and ignoring shame pay a price for any of it?

This issue is all the more acute in the wake of the former President’s wild rally in Ohio on Saturday night, when his unhinged rhetoric and dark demagoguery highlighted the peril he still poses to democratic values.

He took the stage facing legal, political and personal challenges that have grave implications for his hopes of a political rebound and the fate of his business, which forms the foundation of his legend of deal-making greatness. But as his rapturous reception showed, the former President’s impervious support among the Republican base and devoted millions of followers means there is probably nothing that emerges from any kind of investigation that will dent his personality cult.

And while in Ohio, Trump spelled out that he knows exactly what power he has over his base.

“I represent what they want,” Trump said, speaking of a police officer he supposedly met while in office. “They want law, and they want order. And that’s what you want. That’s what this country wants.”

Still, Trump’s uncontrolled behavior and extremism helped devastate the Republican vote in suburbs in swing states like Michigan, Arizona and Pennsylvania. So while he might still be seen as the favorite for the 2024 GOP nomination, his chances of winning a national election may be further eroding.

While there has been a series of blows in recent days to Trump’s false narrative that he was deprived of a second term by a massive Democratic Party conspiracy, facts are again unlikely to tip the balance among supporters fed a stream of lies about the election by a compliant conservative media machine.

The former President is doing what he always does, portraying scrutiny and accountability as evidence of an establishment conspiracy biased against him, and painting a narrative of grievance that his supporters always buy in to. Such a conceit has always been at the center of his political appeal for voters who gravitated toward his assaults on a political system from which they felt alienated. To further his strategy, any legal cases against the Trump Organization are sure to be turned into a pageant of personal persecution by the former President.

Will the truth matter?

New evidence that November’s election was free and fair is also no more likely to convince his followers that their hero lost than the multiple cases thrown out of court.

A sham audit of votes in Arizona by Republican state senators is, in fact, likely to further fuel the former President’s volcanic behavior if it feeds the conservative narrative of irregularities that were rejected by multiple judges.

For example, after details emerged from an excerpt of a new book — “Betrayal,” by ABC’s Jon Karl — that depicts Barr as savaging Trump’s claim he was cheated out of power last November, the former President issued an extraordinary statement.

The more than 500-word rant not only blasted Barr, despite his repeated impression of tilting the scales of justice to benefit the ex-President. It also suggested that Trump has traveled even further from reality in his five months out of power as he pointed to “incredible facts” about cheating that were largely recycled and already disproven conspiracies born of conservative media.

It was unhinged rhetoric that gave a strong impression that the former President now exists in a bunker-like mentality, deeply convinced of his own invented version of reality.

Yet this is the same powerful political force that is still effectively the leader of the Republican Party — one who has left party leaders like Senate Minority Leader Mitch McConnell of Kentucky afraid to take him on and is making support for his election lies the dominant issue in Republican Party primary races.

Trump’s fantastical claims of voter fraud are also the driving force behind multiple efforts by GOP state lawmakers across the country to make it harder for many Democrats, including minorities, to vote.

Some bills equip partisan officials to interfere in local certification processes and institutionalize the kind of pressure that Trump placed on local GOP officials in Georgia to steal victory in November.

Former President Barack Obama warned on Monday that such measures could effectively make it easier for malcontents like Trump to cheat in future elections.

“If we don’t stop these kinds of efforts now … we are going to see a further delegitimizing of our democracy,” Obama said.

It’s also unlikely that Pelosi’s select committee will fracture the fallacies Trump supporters believe about January 6. In fact, Trump acolytes like Georgia’s Rep. Marjorie Taylor Greene are trying to get appointed to the panel in order to turn its meetings into a circus.

There was fresh evidence of Trump’s incandescent state of mind as his lawyers met with prosecutors from the Manhattan district attorney’s office in an effort to persuade them not to pursue charges for alleged financial crimes by the company.

Trump claimed the team was “rude, nasty, and totally biased” against him, claimed they were trying to destroy him and the “Make America Great Again” movement and were radical leftists who were a disgrace to the nation.

The former President no longer has his social media accounts and cannot propagate his fury without the help of retweets and conservative media appearances. But his statement was a taste of the vitriol sure to flow from his camp if charges are brought against his organization.

A flurry of exposés from Trump’s desperate last days in office is emerging, meanwhile, from a series of forthcoming books. According to Karl, the then-President had “the eyes and mannerism of a madman,” in the words of one attendee at a meeting between Trump and Barr after the attorney general said there was no evidence of widespread election fraud.

In another account, by Wall Street Journal reporter Michael Bender, Trump is depicted as getting into a shouting match with Gen. Mark Milley, the chairman of the Joint Chiefs of Staff, after saying he wanted to send the US military into cities that he claimed were in flames amid violence.

Critics often accuse the Washington media of addiction to insider accounts of the crazed behavior inside Trump’s West Wing. Yet while these books, and the contributions of officials like Barr, who spoke to Karl on the record, do come across as an attempt at reputation repair, they also perform a valuable service.

The accounts are building a record of malfeasance on the behalf of the former President. They show just how close American democracy came to the brink, thanks to a former commander in chief who tried to use tactics familiar to the autocrats, like China’s Xi Jinping and Russia’s Vladimir Putin, who he so admired.

Trump’s certain attempts to make his enemies pay a price for a tightening vice of accountability mean that the process of healing from the trauma of his aberrant presidency is only just beginning, and is likely to further disrupt the country’s fragile political equilibrium.