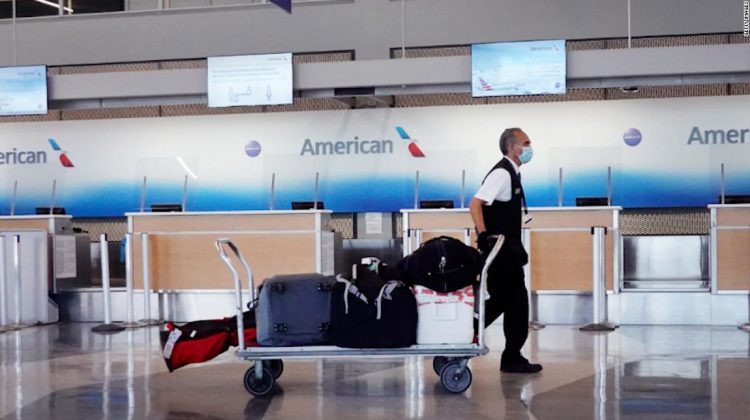 The America that is slowly regaining its vigor is not the same as the one that went away in March 2020.

The omnipresent polarity has worsened and exemplifies the gap between the huge expectations stirred by the long-cherished prospect of reopening and the reality of a complicated return to normality.

While Washington has been fixated by former President Donald Trump’s undimmed assault on democracy and the audacious debut of the Biden presidency, the rest of the country has had more immediate concerns.
The joy of family reunions, delayed weddings, the urge to travel and traffic returning to clog city freeways speak to a national reawakening that has seen infections and deaths shrink since early in the year.

But such rituals have coincided with the jarring return of another quintessentially American rite: the mass shooting, 10 each on the last two weekends alone. Cities like San Francisco and New York are recalling their dangerous after dark reputations of the past. And questions are being raised over whether the pent-up frustration of months of social distancing and consequential mental health issues are combining in a fatal mix with a nation awash in firearms.

As states have lifted Covid-19 restrictions and the weather warmed, many US cities were hit by a sudden spike in gun crime, violence and homicides. Mass shootings have proliferated from Oregon to Louisiana and from Utah to Michigan. Last weekend, there were 10 mass shootings across nine states that killed seven people and injured at least 45 others, according to data compiled by CNN and Gunviolencearchive.org.

There have been 293 mass shootings — defined by an incident in which four or more people are shot — so far this year.

President Joe Biden has scheduled a speech on rising crime and violence on Wednesday, in a striking acknowledgment of the problem and a sign that White House understands the political peril of any prolonged crime spree and the opportunity it would afford for Republicans in the run-up to midterm elections.

Police chiefs around the nation fear a summer crime wave. Emergency rooms filled with desperately ill Covid-19 patients a year ago are now treating the victims of the nation’s other epidemic — gun crime.

In New York City, shootings increased by 73% in the last month compared to May 2020. In Atlanta last week, a worker at a retail store was shot and killed in a dispute over a face mask. Air rage incidents have erupted as passengers relearn the many frustrations of airline travel that are even more onerous in the world of Covid.

The national homicide rate is still well short of levels seen in the 1990s. And all data at this point is somewhat anecdotal given the short control period.

But some police chiefs feel they are now confronting the possibility that a confluence of factors — including economic deprivation, psychological strain, booming gun sales and constrained budgets in some political jurisdictions following a racial awakening after the murder of George Floyd — are joining to create a self-sustaining momentum of violence and unrest.

“We have seen the data change, peoples’ state of mind change, ever since the Covid pandemic has presented so many challenges from the economic hardship, the stress, the anxiety,” Chief Murphy Paul, of the Baton Rouge Police Department in Louisiana, told CNN “Newsroom” on Monday.

“We have to deal with the causes of crime and not just arrest our way of this,” Murphy told CNN’s Alisyn Camerota.

Building back better is difficult

A sense of uncertainty is also infiltrating the economy.

Leaders of the government’s financial regulation agencies told Biden on Monday that the financial system is in robust systemic condition. Brian Deese, director of the National Economic Council, told CNN’s “New Day” that “jobs are growing and wages are going up as well.” The centerpiece of Biden’s proposed economic plan is to “build back better” by providing affordable housing, expanding home and health care for elderly and sick Americans and to free up more workers by improving childcare.

But the economy is also experiencing unique post-pandemic factors not seen after previous economic crises.

Vaccinated diners flocking to finally reopened restaurants sometimes find there aren’t enough waiters and line chefs to serve them. Some staff have moved on. Others rely on government unemployment benefits that pay nearly as well as the grind.

Millions of Americans are taking to the skies, but a shortage of pilots, maintenance issues with newly recommissioned airliners and even severe weather are straining the aviation network to breaking point. American Airlines just canceled hundreds of flights through July.

Key indicators show the economy is on a roll and optimism is high — jobs openings are way up, the S&P index is up 14% this year, banks are thriving and the housing market is red hot. But the off-ramp to the pandemic seems to have deepened existing inequalities. The huge boom in demand and supply chain woes caused by interrupted global trade routes are exacerbating fears of an inflation spike.

The economy has also changed. Many workers are still at home — and some may never want to return after 16 months online. That will have huge implications for city public transport systems and service economies.

In another sign of the kind of economic transformation that is always traumatic for those involved, Washington Prime Group — a major owner of malls in 100 locations — filed for bankruptcy on Monday. The firm was hammered by the loss of rents and sales from shops that were forced to close for over a year. This all came with phalanxes of Amazon trucks rolling out into suburbs across the country day after day.

The Biden White House has made conspicuous efforts to stress the improvement in American life since the President took office, after Trump’s year of denial and mismanagement of the pandemic disasters — a message that will be at the center of the Democrats’ midterm election campaign.

But the emerging societal strains and problems in a rocky reopening are a reminder of the dizzying succession of challenges and shocks that batter every administration, and sooner or later end up on the President’s desk.

The hospitality and hotel industries are — like the airlines — experiencing a sharp turn from famine to feast and are finding it is not set up to cope with the sudden shift.

“For 15 months we were trying to find guests anywhere we could,” Chip Rogers, president and CEO of the American Hotel and Lodging Association, told CNN International on Monday.

“And now that the guests are back, leisure travel is really doing well, we can’t find employees in many critical places. This has been a huge, huge challenge for us.”

Rogers said many workers laid off during the pandemic had found jobs elsewhere. Others are still riding out extended unemployment benefits.

And even when the industry manages to fill its roster of front desk, staff, housekeepers and others, it will still face challenges, Rogers said. Without the return of white-collar business trips, the industry will never regain its pre-Covid strength. There is a fear that in the age of Zoom, convention travel won’t be the same, a reality that would have grave implications for the economy.

It is hardly surprising that the worst domestic crisis since World War II has had far-reaching societal consequences. Past health crises, like plague epidemics in Europe and the 1918 influenza pandemic, triggered political change, unrest and widened already existing fault lines in society.

More recently, the effect of the late 2000s financial crisis took years to play out in political terms in chain reactions that helped lead to populist uprisings like the Trump presidency and Britain’s vote to leave the European Union.

This crisis is far deeper and affected every single American — through bereavement, illness, the loss of education or the psychological ordeal of separation and confinement. The path to recovery will be filled with impediments that are not yet obvious. And the America that emerges on the other side remains a work in progress.