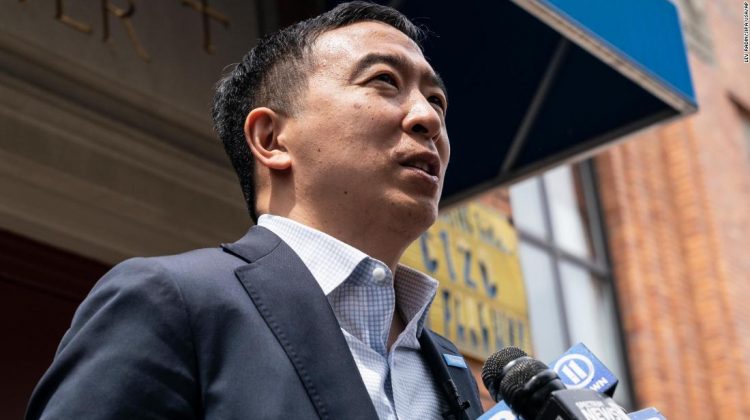 Maybe you’ve noticed Andrew Yang’s striking transformation from Democratic presidential candidate to one of the leading candidates to be the next mayor of New York City.

The businessman-turned-politician has done an about-face on identity politics, as the June 22 primary inches closer (early voting began last Saturday).

Why the abrupt U-turn?

The son of Taiwanese immigrants, Yang has said that the shootings at three Atlanta-area massage parlors in March — an attack that led to the deaths of eight people, most of them Asian or Asian American women — and the ambient anti-Asian prejudice that has hovered over US society during the coronavirus pandemic have made him rethink his attachment to his identity.
“I’ve certainly had the feeling that many Asian Americans walking the streets of New York have gotten over the last number of months, where before, frankly, I might have felt like I blended into the woodwork,” he told The Washington Post. “And now it seems like people notice that I’m there, but they’re not excited for me to be there.”

Despite the shift, Yang still has his detractors, who underscore that his sudden embrace of his identity feels like political pandering designed to tug at voters’ heartstrings.

“He’s just gone from delivering stereotypical jokes to self-righteously condemning them as it has suited his political needs,” The Daily Beast’s Charissa Isidro wrote. “Speaking as a Filipina American: If this is how we’re supposed to get more Asian American representation in politics, I don’t want it.”

In addition, there’s a big difference between sticking up for marginalized groups in stump speeches and centering or even meaningfully including them in a campaign platform. Critics point out that Yang is thin on policy proposals that resonate with or would benefit Asian Americans.

“If Andrew Yang wants to represent the AAPI community, he will need to build trust and organize the community just like any other candidate,” said Sara Sadhwani, a senior researcher at the civic engagement nonprofit AAPI Data. “Sharing his immigrant story, listening and showing understanding for the needs the community faces and, most importantly, making good on any promises that are made to the community — this is all part of responsive representation.”

To discuss the role of identity in Yang’s mayoral campaign, I spoke with the Columbia University professor Mae M. Ngai, who focuses on questions of immigration, citizenship and nationalism.

The following conversation has been lightly edited for length and clarity.

How is identity factoring into Andrew Yang’s NYC mayoral campaign?

He’s been endorsed by Congresswoman Grace Meng (D-NY), and I believe that he’ll get votes from some Asian Americans. But I think that many Asian American voters who take voting a bit more seriously aren’t going to vote for him. He’s not being embraced as somebody who will succeed with representing the community’s interests.

When Yang ran in the 2020 Democratic presidential primary, he angered many Asian Americans by playing into stereotypes. He joked about being good at math. He joked about knowing lots of doctors. I wonder if Yang’s mayoral campaign is, in its own way, a rebuke of his previous campaign. He wants people to notice him. He wants to be more personal.

I agree that he does defy some stereotypes. But that’s more aimed at, I think, White voters, not Asian American voters. When he says things like he wants to make New York City fun again — that’s a very non-Asian thing to say. Because it makes him appear to be not serious. He’s talked about opening schools, which is a universal interest. A lot of his so-called policies, I see them as stunts, because I don’t believe that he’s a very serious candidate. His proposal for making New York City a Bitcoin center — I think that’s preposterous. So, he’s provocative, which is also not an Asian stereotype.

It’s interesting that he appears to have gotten quite far by not being an ethnic candidate. So, for White people who are hesitant about voting for a person of color, he’s not threatening. I don’t know how much support he’s going to get from Asian Americans — because we’d love to have more representation, but it’s got to be more than just a face.

Yang is often criticized for a narrative of his own making. For instance, he didn’t know anything about 50-a, a law repealed last year that allowed police officers to hide misconduct records. But he’s also pilloried for things like saying that his favorite subway stop is Times Square. Does this criticism ever cross the line?

On the other hand, there’s a danger whenever you say that an Asian American isn’t from here. Saying that invokes the stereotype that Asian Americans are always foreigners.

That’s the exact conversation that arose because of the New York Daily News’ cartoon that depicts Yang as a tourist. The paper defended itself against accusations that the cartoon is racist, but to me, it traffics in the “Asian Americans are perpetual foreigners” stereotype. Where does this stereotype come from?
It comes from the exclusion laws, which date back to the first Chinese exclusion laws around 1882. Chinese were excluded because they were supposedly unassimilable. Chinese laborers were excluded from entering, and all Chinese were excluded from citizenship. So, if you say, legally, that someone can never be a citizen, then that person’s what? Always a foreigner.
Even Chinese Americans who were born in the US, their citizenship wasn’t recognized. It wasn’t until 1898 that the US Supreme Court upheld birthright citizenship for all persons, but in particular for Chinese born in the US.
The idea that Chinese can never be assimilated — can never be “real Americans” — that’s a political or cultural idea, but it also was inscribed in laws, and those laws weren’t repealed until after World War II. And Asians in general couldn’t naturalize until 1952. That’s not very long ago. That’s just a couple generations ago.

So, the idea that Asians Americans are perpetual foreigners — people think that’s just a cultural stereotype, but it has a very deep history that was entrenched in law. There were overriding exclusion laws, but there were also state and local laws on the books until the late ’40s.

What’s the most interesting thing to you about the Yang/identity conversation?

I think that it’s interesting that he’s not being discussed as the Asian American candidate. (Laughs.) That part of his campaign has worked. He’s not really running on an identity platform.