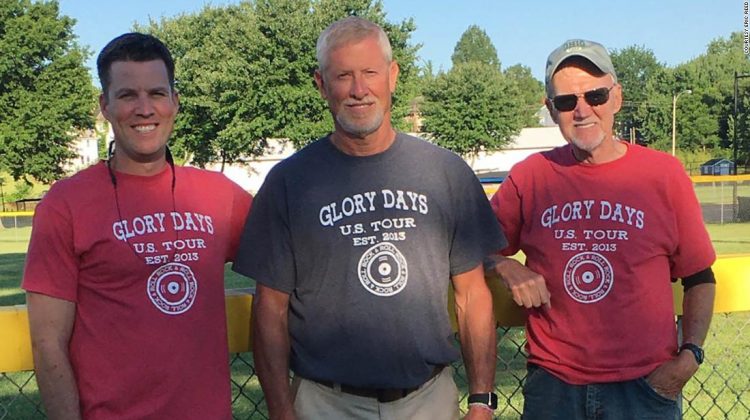 That’s the year Eric Reed got his father, Ted Reed, and his father-in-law, Bob Caldwell, concert tickets to see the Southern rock band as a Father’s Day gift.

“Before then, I really wasn’t a huge fan of live music, but that trip was just … I don’t know, something just clicked as I’m lying there on the lawn in the amphitheater listening to “Freebird,” I think, with every dad sitting there with me. I just thought, ‘This is nice.'”

And until the pandemic, the tradition continued for eight years, swelling to include a road trip, small-town pub pit stops and a game they’ve dubbed “Best of Rock.”

Music is ostensibly what brings Eric Reed and the men in his family together every year for Father’s Day.

But it’s the meaningful conversations and quality time that motivate them to keep up the tradition.

After that trip, Eric decided to make this an annual Father’s Day concert tradition. He rents a van and invites friends to join the trio. And for eight years, the tradition continued until the pandemic put a pause on their adventures last year.

Finding ways to stay connected through the pandemic

They all live in or near Marietta, Ohio, which is 120 miles east of Columbus. But during the pandemic, they were cautious about interacting with members outside of their home, often only seeing each other from a distance in driveways.

Now that the trio is fully vaccinated and with much of the country lifting its pandemic restrictions, Eric decided to revive the tradition and bought tickets to see Green Day, Weezer and Fall Out Boy in Pittsburgh in August.

Over the years, they have picked up family or friends interested in joining them, but the core three remain the same, according to Eric.

“We rent a 15-passenger van, we all load up in that and drive up the Ohio Valley along the river and we stop in these towns at these old bars and these bars are just — their heyday was like 50 years ago — but they have so much nostalgia in them,” he said. “So it just becomes a thing where the trip is more fun than the concert itself.”

None of the family members are musicians by any means, Eric said. But they all have an interest in good music from a variety of time periods.

During quarantine, the group, along with other family members, would get on Zoom to continue a game they play during their annual Father’s Day trip. It’s a tradition they’ve dubbed the “Best of Rock” bracket game.

Eric sets the bracket dates and the group discusses the “best of” song from whatever year is listed, pitting classics against classics.

Getting lost in the moment

“I’ve enjoyed the trips because for one, I actually never even went to concerts when I was young,” Ted said, “and of course like everyone, I like music and there’s a camaraderie that develops on these trips and the bracket game, where we vote for our favorite songs and along with that we get into some pretty heavy discussions about any and all topics.”

“Good people, good time, good debate, good discussions. We may not solve the meaning of life problem, but we sure do work on it,” Ted said.

Eric said the group often visits the same venue every year, The Pavilion at Star Lake in Burgettstown, Pennsylvania. The drive from Marietta, Ohio, is long enough to allow Eric and the crew to visit small towns and their bars along the way.

Due to health complications, Ted doesn’t drink anymore, so the group has made him their designated driver as they bar hop from town to town on their way to the concert of that year.

“We have about four stops that we stop at, the first being one in our hometown,” Eric said. “If the walls could talk! The stories that these bars could tell you.”

The group’s adventures sparked a short novel, written by Eric, something he said his dad always wanted to do.

“Time slips away, but music can remind us sometimes looking back helps us move forward,” a line from Eric’s unpublished book reads.

“Music does that for everybody though, right? It reminds you of a particular time in your life and at least for that day, it gives you a chance to stop time because of this wheel that we’re on in life,” he said.

He added, “To get lost in the moment is pretty rare, which is kind of what we’re after, at least for a day.”