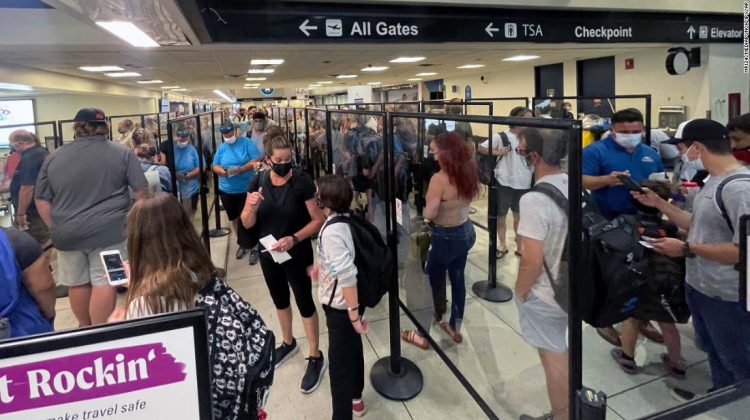 Everything is opening at the same time and people are desperate to travel. As concerts resume, theme parks open, families reunite, lovers tie the knot and stir-crazy Americans dream of vacation, airlines that had to hurriedly recommission fleets are struggling to keep up: American Airlines cancelled 188 of flights over the weekend and is trimming hundreds more in the coming summer travel season. United Airlines CEO Scott Kirby warned on Sunday of a longer-term problem filling cockpits because the US military is training fewer pilots as it scales back global wars.
Security screeners processed 2.1 million people in US airports on Sunday — the most since March 7, 2020, before the Covid-19 curse struck. Flying itself, never a pleasant experience in the post-9/11 era, is now even less fun. Apart from mask wearing on board, there’s been a spate of mid-air scuffles as travelers’ tempers flare as they cram back into aluminum tubes again.

The airline industry isn’t alone in encountering turbulence as the US transitions from sheltering from the coronavirus to learning to live with it. The economy, though recovering, is uneven. Many industries, especially in the hospitality sector, can’t find enough staff. A crime wave has gotten so bad that President Joe Biden plans to address it this week. Extreme drought in the West threatens to spark a disastrous wildfire season and worsen late-stage pandemic dislocation. And fierce political divides were only widened by a virus uniquely able to inflame cultural fault lines.

It’s not quite what Biden bargained for when he planned a national July 4 party to declare freedom from Covid-19. The “Roaring 20s” will have to wait a while.

‘My serious proposal to the United States’

Iran’s new President-elect Ebrahim Raisi said Monday that he would not meet with Biden — and struck a tough tone on efforts to revive the Iran nuclear deal. “My serious proposal to the United States government is for them to return [to the agreement] in an expedited manner … in doing so they will prove their sincerity,” Raisi said. “The people of Iran do not have good memories of the JCPOA,” he added, referring to the formal name of the nuclear deal.

“The Americans trampled on the JCPOA and the Europeans failed to live up to their commitment. I reiterate to the US that you were committed to lifting the sanctions — come back and live up to your commitments,” he said in his opening statement.

Barack Obama is back, and he’s not mincing words.

The former President warned Monday that the US was at risk of joining the list of once “vibrant” democracies around the world that “go into reverse.”

“We are not immune from some of these efforts to weaken our democracy,” Obama said, a day before Senate Republicans are expected to kill off a historic effort to safeguard voting rights.

The former President had hoped to stay out of politics once he left the White House (his predecessor George W. Bush went dark for almost the entirety of Obama’s two terms in power.) But Donald Trump drew him back to the battlefield in the elections of 2018 and 2020 — when he delivered an extraordinary warning via primetime Democratic National Convention address that democracy was under assault.

Obama on Monday hit at out Republican senators who are set to prevent even a debate on the voting rights legislation. The voting bill establishes national standards for mail-in voting, early voting and registrations of all eligible Americans. It would effectively expand the franchise at a time when many Republican states are building on Trump’s election lies to make voting more difficult, especially for Black Americans who tend to vote for the Democrats. Republicans claim the bill is a massive federal power grab and subverts the power of states to run elections. The Constitution however does reserve a role for Washington to intervene in elections.

“Think about this: In the aftermath of an insurrection, with our democracy on the line, and many of these same Republican senators going along with the notion that somehow there were irregularities and problems with legitimacy in our most recent election,” Obama said. “They are suddenly afraid to even talk about these issues and figure out solutions on the floor of the Senate. They don’t even want to talk about voting. And that is not acceptable.”