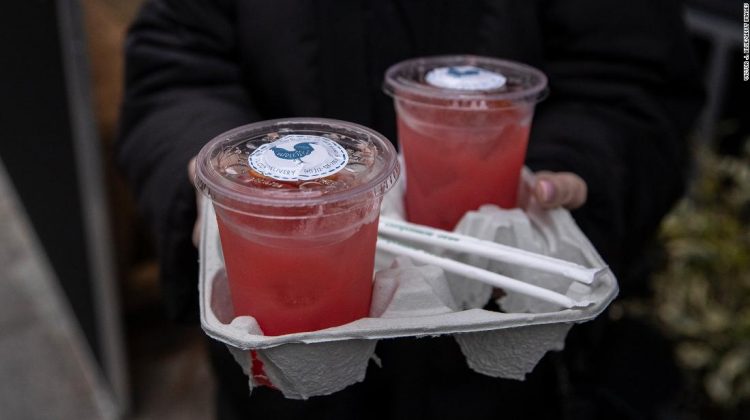 The National Restaurant Association counted about 26 states — most of the ones that permitted to-go cocktails during the pandemic — that have opted to allow the practice to continue. Georgia and Texas, for example, made to-go cocktails permanent this spring. Colorado has extended its allowance until 2025, and others like Massachusetts and Virginia stretched the allowance to next year.

It’s one of a small number of states that have let the provision expire or are still deciding on how to proceed. Pennsylvania’s provision also expired, but lawmakers may reinstate it.

In its statement explaining the move Wednesday, the New York State Liquor Authority said the state’s legislature “failed to permanently codify the ability of restaurants to offer alcohol to-go.”

Though bills have been introduced to allow NY restaurants to serve alcohol to-go moving forward, the legislature failed to enact them before the end of session. Because of that, “all temporary pandemic-related suspensions and directives, including privileges allowing bars, restaurants, and manufacturers to sell drinks to go, will end after June 24th,” the agency said.

Advocates of the program were dismayed by the news.

“This is such a lifeline for the industry,” Mike Whatley, vice president for state affairs and grassroots advocacy at the National Restaurants Association, told CNN Business. “It was during the height of the pandemic. And it continues to be now.”

It may seem like restaurants are whole again: Diners are flocking back to restaurants, and some have reported that sales are back to pre-pandemic levels. But “restaurants are hurting still, and have suffered so much over the past 15 or 16 months,” Whatley said. “There’s so much debt from the past year that we need every tool available to us to help us get fully past the pandemic.”

In New York City, once the epicenter of the pandemic, bar owners were surprised by the abrupt change.

“We had no notice,” said Linden Pride, principal at the world-renowned bar Dante. The bar has been selling bottled cocktails that customers can add to their home bars, Pride, the bar’s co-owner, said. Dante also partnered with other New York institutions, such as the Barclays Center and restaurant operator Jean Georges. Now, the bar still has hundreds of stickers, bottles and other inventory. “It allowed us to connect to our community in a way that we hadn’t been able to do before,” Pride said.
Dante encouraged customers to buy the remaining bottled cocktails in an Instagram post on Thursday. “Make the most of these last 24 hours and stock up on signature Dante cocktails,” the post said. Commenters expressed dismay. “So sorry to lose this fab option,” one wrote. “You got us through the lockdown and all the stress. This is devastating news,” said another.

Other bar owners are also scrambling.

“It’s still an important lifeline for us,” said Marva Babel, who owns the Brooklyn bar Ode to Babel along with her sister Myriam. Babel and her team started serving to-go cocktails early in the pandemic. They developed a weekly cocktail menu, posted it on social media on Thursdays, and hand-delivered flasks filled with the cocktails over the weekend.

“Literally me, my sister, my husband and my friends would drive around the city delivering it to our patrons,” Babel said. “People really appreciated the effort,” she said. “That saved us. And I think, because of that we became even more popular.”

Once Ode to Babel reopened its doors, customers were still asking for the bottled cocktails. So Babel decided to keep the option. Now, she has $6,000 to $7,000 worth of inventory, and she’s not sure what to do with it. “For small businesses like mine … it’s a lot of money,” she said.

Plus, Williams noted, some people are still not comfortable eating in restaurants. “There’s not 100% confidence,” he said. “For a lot of people, there’s still caution.”