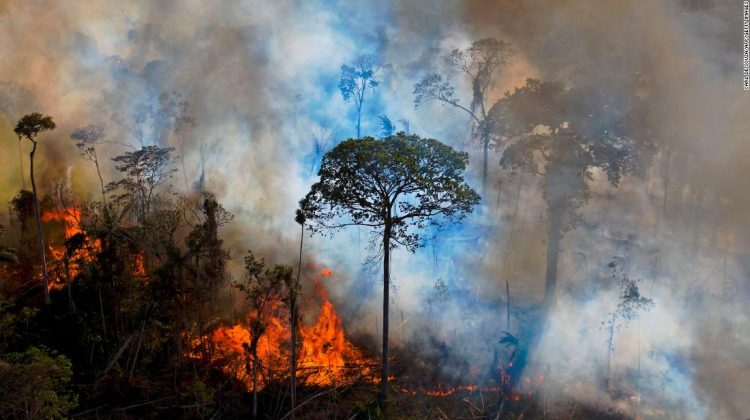 Experts say the region has rarely been drier than it is now, and researchers who monitor the Amazon have already spotted a rash of large fires this year. The rainforest’s first major fire of 2021 occurred more than a week earlier than last year, according to Matt Finer, a senior research specialist at the non-profit Amazon Conservation, who leads the organization’s real-time fire monitoring program.

“Widespread drought conditions in 2021 are a worrisome sign that extreme fire risk could affect a large part of South America, straining firefighting resources and threatening ecosystems, infrastructure, and public health,” said Douglas Morton, a NASA Earth scientist who studies fires in the Amazon and surrounding areas.

Most large fires in the Amazon are started by humans on recently cleared land. And deforestation for logging, mining and farming fragments the forest, experts say, making it more susceptible to catching fire on its edges.

“The edge of a forest is warmer and drier than large tracts of unfragmented forest, so fires are more likely to start at the edges and move into the forest,” said Marcos Heil Costa, a professor at the Federal University of Viçosa in Brazil.

Deforestation was up 67% in May compared to last year, according to the INPE. This year’s fresh kindling is on top of what was cut down last year, when around 10,900 square kilometers — an area larger than 2 million US football fields — slashed mainly for cattle ranching, farmland and timber production.
It was the worst year for Amazon deforestation since 2008.

“All that deforestation that everyone was fretting about in 2020, now it’s coming back to burn,” said Finer. “And I think that the newer deforestation that’s spreading now, that’s what we’re going to see burn in August or September when the dry season really intensifies.”

Brazilian President Jair Bolsonaro has faced condemnation at home and abroad for his handling of the deforestation crisis in the Amazon, which has skyrocketed on his watch. In April, Bolsanaro asked President Biden for his “personal engagement” to protect the Amazon, but no deal has been reached by the two leaders.

The rampant deforestation combined with extreme drought is turning parts of the Amazon into a tinderbox.

2019 was a destructive fire year that captured the world’s attention. At one point in 2019, the Amazon was burning at a record rate. But Brazil actually saw more total blazes sparked in 2020, according to data from Brazil’s National Institute for Space Research (INPE).
And while fires tore at the edges of the Amazon last year, many others sparked in the Pantanal, the world’s largest tropical wetland located south of the rainforest, which experienced its worst fires since at least 2002.

Experts fear the region is set for a repeat in 2021.

While heavy rainfall triggered flooding in the heart of the Amazon last month, extreme drought is gripping parts of the southern Amazon and the surrounding regions, according to Paulo Brando, an assistant professor and scientist at the University of California-Irvine.
Last month, Brazil’s National Institute of Meteorology issued an emergency alert warning that five states — Minas Gerais, Goiás, Mato Grosso do Sul, São Paulo, and Paraná — would likely see little rainfall through at least the end of September.

Mato Grosso, which includes parts of the southern Amazon, has been the center of most of the fire activity so far this year, according to Finer.

“As of yesterday, we’ve detected 17 major fires so far this year and they’ve all been in Mato Grosso,” Finer said.

The drought could also exacerbate the situation in the Paraná River basin — home to the continent’s second-longest river, key shipping routes and hydropower stations — most of which is already in moderate to extreme drought, according to the alert. Last year, low water levels grounded several ships, forcing some to offload cargo to navigate the shallow river.

Warm ocean temperatures in the tropical North Atlantic Ocean in 2020 and a La Niña weather pattern that’s persisted over the Pacific Ocean have shifted precipitation conditions across the entire South American continent, Morton said, including the rainforest.

Few ecosystems on Earth are as critical to the global climate as the Amazon rainforest.

Its vast tree canopy serves as an “air conditioner” for the planet, scientists say, influencing global temperature and rainfall patterns. Through photosynthesis, the plants and trees of the Amazon absorb billions of tons of carbon dioxide from the air each year, which helps limit how much of the heat-trapping gas is in the atmosphere.

But when it burns, the carbon that is stored in the forest is released into the air, where it can stay for hundreds of years and contribute to even more global warming.

A study last year led by Brando found that fires could irreparably damage the forest’s ability to protect against future warming, to the point that the forest could begin contributing more greenhouse gases to the air than it absorbs by 2050 — or sooner.

“Climate change doesn’t respect political and geographic boundaries, Brando said, “and what happens in the Amazon will affect the entire planet.”

CNN’s Taylor Barnes and Rodrigo Pedroso contributed to this report.