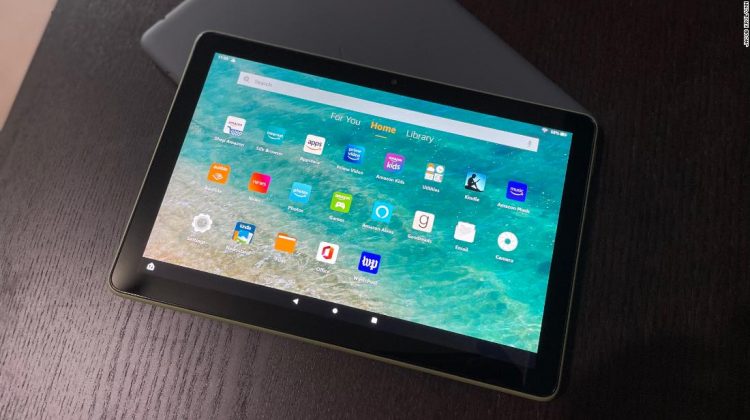 As we’ve written in the past, Amazon’s Fire and Fire HD tablets aren’t the sleekest, fastest or the coolest on the market, but what they lack in flare they exude in value. That’s where the four — yes, count ‘em four — new Fire HD 10 models come in. After weeks of testing, we’ve concluded that unless you’re purchasing a device for a child, the standard $149.99 Fire HD 10 makes the most sense for the masses. Let’s break down why and talk about its siblings in the Fire HD 10 Plus, Kids and Kids Pro.

Who these are for: Amazon’s Fire HD 10 is perfect for someone who wants an affordable tablet with a good display, zippy performance and access to a ton of entertainment-focused apps. No Fire tablet has the sharpest display or access to most apps, but for $149.99, it’s hard to argue with what you get.

What you need to know: While Fire OS (the OS that powers the Fire HD 10 family) is based on Android, it doesn’t have access to Google apps or services. Amazon’s Appstore has all the big hitters (Twitter, Netflix, Facebook, TikTok and Disney+, among others), but not every app is here. Fire HD 10 works well for entertainment and light productivity use cases, but we’d stay away from the Productivity Bundle or the HD 10 Plus model. The core Fire HD 10 is the choice for most.

How these compare: Amazon’s Fire HD 10, Fire HD 10 Plus, Fire HD 10 Kids and Fire HD 10 Kids Pro feel better and are faster than the Fire 7 or Fire HD 8. They’re at the top of Amazon’s line and offer some of the best value in the tablet space. The Fire HD 10 line isn’t as powerful as an iPad (starting at $329) or a Galaxy Tab (starting at $279.99) and can’t do as much as a full-fledged tablet. For $149.99 (starting), the Fire HD 10 lets you accomplish a lot in a nice build that doesn’t skimp on performance. And the Kids models offer peace of mind for parents with a terrific warranty.

As the names suggest — Fire HD 10, Fire HD 10 Plus, Fire HD 10 Kids, Fire HD 10 Kids Pro and Fire HD 10 or 10 Plus Productivity Bundle — these are all variants of the Fire HD 10. Amazon’s largest tablet was last updated in 2019, and it’s getting a pretty significant glow-up for the second anniversary.

Fire HD 10 now looks like a modern tablet with slimmer bezels around the 10.1-inch display, a USB-C port and four colors to choose from (black, denim, lavender or olive). Like the Fire HD 8, the HD 10’s front-facing 2-megapixel camera is in the correct spot. When held in landscape mode, the camera sits center on the top bezel. It’s handy if you’re snapping selfies or taking a video call in this mode and speaks to the optimal mode for using the Fire HD 10. In this orientation, the right-hand side features the volume rocker, power button, USB-C port, headphone jack and two microphones. It’s a little jarring when coming from other tablets, like the eighth-gen iPad, but after a few days, you can get used to this button layout.

The top frame, when held horizontally, features two upfiring stereo speakers. They’re pretty solid as far as speakers go, with the ability to get quite loud and deliver pretty strong bass. We did notice some muddiness on tracks with many instruments, but for most content, these work just fine. You can pick between 32GB or 64GB of internal storage. Either way, you’ll get a microSD card slot for easy expansion.

This design language extends across all the models. The rear side features a soft molded plastic-like finish with an Amazon logo and a 5-megapixel primary camera. The core HD 10 and HD 10 Plus weigh in at a light 465 grams, while the Kids and Kids Pro get wrapped in protective cases, which increase the weight. The Kids models are purpose-designed to protect against drops. The standard Kids Edition case is fairly bulky, with the Kids Pro model having a slimmer and more compact design. Neither case is big enough to prevent a child from picking up or holding the tablet comfortably, though.

All of the Fire HD 10 tablets are running Amazon’s customized version of Android, Fire OS. And unlike a Pixel 4a 5G or Galaxy S21 that supports Google Services and the Play Store (the central place for downloading apps across Android), neither of those are supported here. Fire OS is based on Android 9, but Amazon’s slapped a very custom interface on top of it. And all of the 2021 Fire HD 10s run Fire OS quite well — you can quickly zip through screens, open and close apps or even use two apps at once. That’s all pretty handy, but the ideal use case of a Fire tablet is still entertainment with some light productivity. After all, for a tablet starting at $149.99, this thing seriously undercuts the iPad and Galaxy Tabs, but it can’t do as much.

Amazon’s Appstore features the big hitters — Netflix, Hulu, HBO Max, Disney+, Roblox, Peacock, Twitch, Candy Crush Saga and Minecraft, among many others. All of the Amazon experiences are available here also — Prime Video, Prime Music, Audible, Kindle, Washington Post and Amazon.com. You can also swipe to access your Library, which contains all the digital items you’ve previously purchased with your Amazon account. And you’ll need to sign in with an Amazon.com account to set up the Fire HD 10.

You get access to a lot of content for $149.99 here. Taking in movies or TV shows on the 10.1-inch 1080p display wasn’t on the same level as an iPad Pro, a Galaxy Tab or even an iPhone 12, but it did offer an enjoyable way to consume content. We enjoyed watching “Star Wars: The Bad Batch” on the HD 10 as it handled darker scenes quite well, but also was capable of showing saturation and vibrancy when needed. In comparison to the eighth-gen iPad, it was a pretty similar experience with both delivering accurate colors and contrast points. The screen was bright enough for watching indoors and displayed colors accurately.

The Fire HD 10, Kids and Kids Pro feature 3GB of RAM, which is a 50% bump over the 2019 model, and delivered a smooth experience in our testing. We could easily split two apps — one on the left and one on the right — to use both at once, play a bit of Minecraft, stream “Loki” on Disney+ and then still have some time for web browsing. At times we noticed a slight hiccup here or there, but the Fire HD 10 blazed past the slow Fire 7 and even our current budget tablet pick, the Fire HD 8 — 3GB of RAM is plenty when you’re mostly using the tablet for entertainment and other lighter tasks.

The Fire HD 10 also delivers long-lasting battery life. Amazon says the battery life is up to 12 hours (depending on use) and in the CNN Underscored battery test the Fire HD 10 lasted for 10 hours and 30 minutes. That’s solid for a device at the $149.99 price, and the HD 10 Plus lasted only five minutes longer. Our test consists of a video running on a loop with the brightness set to 50% and connectivity disabled.

Those in need of more power could spend an additional $30 on the Fire HD 10 Plus. It pairs the same quad-core processor with 4GB of RAM, but we didn’t notice a significant speed boost on this model. In side-by-side tests, apps open at the same rate, and both deliver a fluid user experience. For instance, Fire tablets support multiple user profiles, and these could easily switch between a parent’s and a child’s account. One reason to upgrade might be for longevity; 4GB of RAM will likely keep this device chugging along smoother with future updates, but we can’t be sure about that. The other core feature difference is that the Fire HD 10 Plus supports wireless charging, but it’s unnecessary.

We were able to hammer away at emails on the keyboard in this bundle and even work on some slide decks, but it wasn’t anything compelling. In comparison to the Magic Keyboard or Logitech’s Combo Touch, the keys here bottomed out more frequently and are flat, with no real edges to make it easy to find the next key. On the plus, though, there is a full row of function keys. The Bluetooth keyboard is also really cramped to type on. The Microsoft apps run fine here as well; all were plenty fast on both the HD 10 or HD 10 Plus, with no crashes. Amazon needs to do some work on Fire OS for it to really play in the productivity space, though.

The tablets themselves are identical to the standard Fire HD 10 you can buy right now, but with a few additional features designed to keep your kids entertained with educational content and reassure you about spending money on a gadget. That means you’ll get the same performance, battery life, high-quality display and expandable storage as the Fire HD 10.

Beyond the names, there are minimal differences between the two tablets. The traditional Fire HD 10 Kids is designed for kids ages 3 to 7, while the Fire HD 10 Kids Pro is meant for kids between 6 and 12 years old.

The standard version comes with a bigger, bulkier case that provides added protection to the tablet. The Pro model comes with a slimmed-down case that older kids aren’t going to be embarrassed by (at least our kids mentioned that as one benefit). An interesting design choice we noticed about the cases is that the kickstand on the back of each case is located in a different spot.

For example, on the Fire HD 10 Kids, the kickstand is on the same side of the screen as the front-facing camera and speakers. The Fire HD 10 Kids Pro has the kickstand on the opposite side, putting the camera and speakers near the top of the screen when you have the tablet standing up. The orientation is intentional, as you can’t rotate the case due to cutouts for the speakers and buttons. We can’t think of a good reason for the difference, other than the fact that older kids may be more likely to use the video calling feature.

You get more than just a case at the price of $199, which is more affordable than the eighth-generation iPad. Amazon includes several benefits to its Kids products, such as a two-year worry-free guarantee. If the tablet is broken, Amazon will replace it, no questions asked. You also get a year subscription to Amazon Kids+, the company’s parental control service, along with access to kid-specific games, apps, TV shows, books and movies for the respective age of your child.

We’ve used Amazon’s Parent Dashboard for years now and have found it to be one of our favorite tools to limit screen time, learn more about the apps our kids are using and have peace of mind knowing the content they can access is appropriate.

One other change Amazon made with this year’s crop of Kids and Kids Pro models of its new tablets is that there’s now a different home screen experience based on the age of the child profile currently using the tablet.

The standard Kids model will have larger icons that are easier for young children to tap and navigate, while the Kids Pro model will have a screen layout similar to standard tablets and phones with smaller app icons.

Amazon introduced many Fire HD tablet models this time around, but the standard Fire HD 10 makes sense for most users. The processor and RAM inside are more than enough to make navigating Fire OS zippy, enable some multitasking and let you game or stream content efficiently. It’s more modern-looking than ever before, with slimmer bezels, and a switch to USB-C makes it easy to charge with a cable you already have around the house. For $149.99, you’re getting a lot for a price that undercuts pretty much every other tablet on the market.