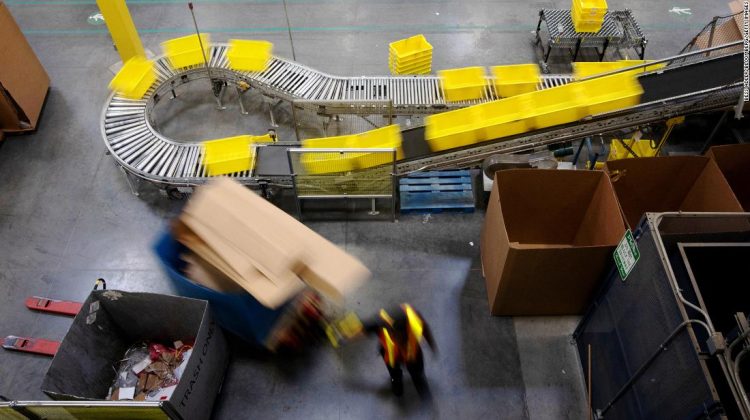 And now it’s a question of how many others will follow — especially during a time when some firms are desperate for workers.

Amazon (AMZN) kicked off June with an announcement that it would stop testing for cannabis metabolites as part of its drug screening program for positions not regulated by the US Department of Transportation. The company also said it would back the federal Marijuana Opportunity Reinvestment and Expungement (MORE) Act, a recently reintroduced bill aimed at descheduling marijuana and reassessing some past cannabis-related convictions.

It’s not yet clear to what extent Amazon will fund cannabis reform efforts on the federal level as well as to what any future business endeavors in the space may be. Amazon spokespeople did not comment beyond the company’s June 1 statement and declined to respond to questions posed by CNN Business.

To have have one of the world’s largest employers take this stance — and in such a public manner — could prove immensely influential, said Andy Challenger, a senior vice president of outplacement firm Challenger, Gray & Christmas.

“When a major company like this makes announcements that are paradigm-shifting, it definitely paves the way and makes it easier for other organizations to do that,” Challenger said.

State laws and public opinion have grown more cannabis-friendly in recent years. More than two-thirds of US states have medical cannabis laws in place; of those, 18 have given the go-ahead to recreational cannabis programs (not including South Dakota, where a voter-approved measure is in the throes of a legal battle). And the latest poll from Gallup found Americans’ support of cannabis legalization at an all-time high — 68% of those surveyed were in favor.

About half of the states with legal medical cannabis have explicit employment protections for registered medical cannabis patients, and states such as New York and Nevada have statutes that limit the firing of employees for recreational cannabis use.

Prior to 2017, no state court ruled in favor of workplace rights for employees’ off-duty cannabis consumption in states with medical cannabis laws, but that trend has started to change in recent years, said Paul Armentano, deputy director of cannabis advocacy group the National Organization for the Reform of Marijuana Laws (NORML). Courts in states such as Arizona, New Jersey, and Pennsylvania have upheld employees’ rights to access cannabis while off the job, he said.

Some of those cases have highlighted shortcomings of conventional drug screening technologies as they relate to cannabis, Armentano said. Cannabis does not behave similarly to alcohol in the body, and evidence of use can stay in a person’s system far longer after any psychoactive effects have dissipated.

In other words, a positive test for cannabis metabolites does not necessarily mean that someone is currently impaired.

Even the federal government has relaxed some policies toward certain employees’ use of cannabis, Marijuana Moment has reported. Marijuana remains a Schedule I substance, which means it is illegal at the federal level.

Along the way, and even in the absence of state laws on the matter, some companies have removed marijuana from their workplace drug tests. With a few exceptions, most of these corporate policy shifts have come quietly.

Between 2015 and 2020, clinical laboratory operator Quest Diagnostics saw a 5.2 percentage point decrease in the number of firms that tested for tetrahydrocannabinol (THC) metabolites, said Barry Sample, senior director of science and technology. He added that the drop was more pronounced (8.5 percentage points) in recreational cannabis states.

While state cannabis laws, including measures specific to employment drug testing, have been a major driver of this private-sector shift, economics have played their part, too, Challenger said.

“Certainly [a tight labor market] was the reason why you saw a handful of companies make those announcements around 2018 or 2019,” he said. “The labor market was virtually full employment … we saw them figuring out all sorts of ways to attract talent.”

Last week, shop chairmen in Michigan and Indiana of the labor union UAW called on General Motors to stop screening for cannabis use as one potential solution for hiring shortages, the Detroit Free Press reported.

The pay scale has to improve, he said, adding that he believes the automaker should seriously consider adjusting its drug testing policy in order to attract more workers.

The issue is under review internally within the company, Dan Flores, a GM spokesperson, told CNN Business.

Despite shifts in some state laws, a positive reading for the presence of THC remains a fireable offense at businesses in many states — including cannabis legalization trailblazers like California and Colorado.

In California, the first state to legalize medical cannabis, lawmakers introduced a bill this year to stop employers from using a hair or urine test (which would show past evidence of cannabis use) to determine a worker’s employment status, according to the Sacramento Bee.
In Colorado, the first state to have legal recreational cannabis sales, efforts to amend the lawful off-duty activities statute to include cannabis use and other state-legal activities have been unsuccessful to-date. In 2020, a related bill was killed in committee, according to The Denver Post.

Speaking on behalf of the 2020 legislative effort was Brandon Coats, a 41-year-old Denver man who served as the plaintiff in what became a landmark court case for off-duty cannabis use and employment. Coats was fired from his telephone customer service job at satellite TV company Dish Network in 2010 after a random workplace drug screen showed evidence of marijuana use.

Coats, a registered medical marijuana patient who was left 85% paralyzed following a car accident when he was a teenager, used cannabis at night to help control involuntary and debilitating muscle spasms. Coats sued Dish for wrongful termination but lost at trial court, the state court of appeals and eventually the Colorado Supreme Court.

Colorado’s NORML chapter plans to hold more stakeholder meetings and run another employment protection bill in Coats’ name in the 2022 session, said Ashley Weber, the chapter’s executive director. And, in part because of Amazon’s recent announcement, advocates such as Coats are optimistic for a different fate.

“I’ll always be willing to fight for it,” he told CNN Business.