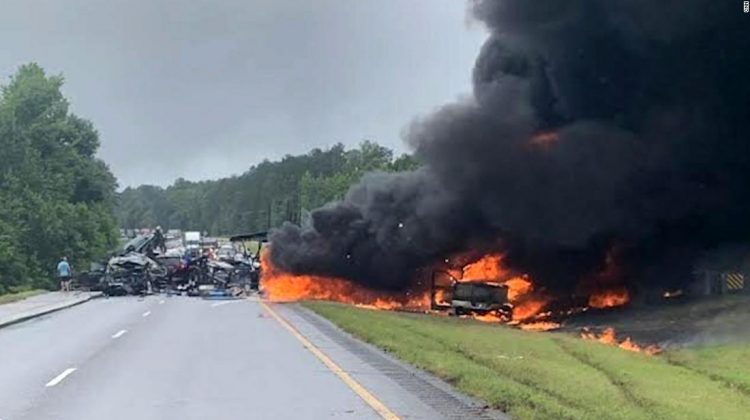 Cody Fox, 29, of New Hope, Tennessee, and his nine-month-old daughter were identified in a press release issued by the Alabama Law Enforcement Agency (ALEA) Sunday night.

The other victims in the crash were children aged between three and 17, who were traveling in a vehicle belonging to a ranch for neglected or abused school-age children, authorities said.

The crash happened about 120 miles southwest of Camp Hill, Alabama, where the ranch is located.

“Yesterday, was an extremely heartbreaking day for the state of Alabama as 10 lives were tragically lost in one horrific event,” ALEA’s Secretary of Law Enforcement Hal Taylor said in the release. “It was a difficult and unimaginable scene for many, and our thoughts and prayers are with all involved as we continue to investigate and provide closure for those affected.”

The National Transportation Safety Board (NTSB) sent ten investigators to the scene in Butler County to work in coordination with the Alabama Highway Patrol, the agency said. The “investigation will focus on vehicle technologies such as forward collision warning systems, CMV fuel tank integrity, motor carrier operations and occupant survivability,” according to the NTSB.

Heavy rain fell across the Southeast on Saturday after a tropical depression that had been known as Tropical Storm Claudette came ashore in Southeastern Louisiana early that morning.

The deadly crash occurred as storms swept through Alabama, according to Butler County Coroner Wayne Garlock.

At least 17 vehicles, including two commercial vehicles, were involved in the incident on I-65 northbound at mile marker 138, according to the ALEA release.

ALEA’s Taylor said that investigations such as this are the most difficult part of the agency’s job.

“I would like to offer my sincerest condolences to the friends and families of loved ones lost in Saturday’s terrible crash, as well as my gratitude to all of the first responders and volunteers who quickly and valiantly responded to the scene,” Taylor said.

Victims from home for neglected and abused children

Of the nine children killed in the crash, eight were in a vehicle from the Tallapoosa County Girls Ranch, according to Garlock.
The ranch provides a home for neglected or abused school-age children, according to the Alabama Sheriffs Youth Ranches, the nonprofit that manages the ranch and others across the state.

The ranch’s director was the driver of the van and survived, according to the Youth Ranches CEO Michael Smith, but she lost two children of her own in the crash, he told CNN. The director is in hospital “in serious but stable condition,” Smith said.

She was likely saved by bystanders who pulled her from the vehicle while she was unconscious and trapped inside, Smith said.

“Her life was saved, and we’re so blessed with that,” he said. “Unfortunately we lost the other eight passengers.”

Although the names were not made public, many people turned up to a vigil to pay their respects to the lost children Sunday night.

The mood in the gym-turned-counseling-center was heavy with several people crying and many looking shocked from the news of the incident.

Maddox told CNN the school was opened to “show families and students that they are not hurting alone.”

Four high school students who attended his school were killed in the incident, he said, although he declined to identify them citing student privacy.

Lacey Willis, a CNN producer, was caught in the pile-up as she returned to Atlanta from a family beach trip in Destin, Florida, with her husband and their 6-month-old daughter.

She said the weather had been bad about an hour prior to the crash. At the moment of the wreck “it wasn’t downpouring” but there was still a lot of water on the road, Willis told CNN,

Willis was in the backseat of the car with her daughter when she felt an impact, she said. Their car had hit a guard rail, setting off the airbags and sending them into the grass on the median.

She grabbed her daughter and began walking away from the accident when she noticed vehicles had started to catch fire.

“I’m barefoot, standing on I-65, walking, walking far enough away,” she said. “I was just praying.”

Her husband began helping other victims involved in the multi-vehicle crash, pulling a family — a man, a woman and their two kids — from a truck that had flipped on its side, she said.

People began calling out for someone to call 911, with one shirtless man yelling for nurses and doctors to help. No one knew what mile marker they were near, Willis explained.

Willis and her family were stuck at the scene for five hours. Some people were stuck on the side of the road because their cars were on fire, she said.

Willis said she was “very grateful” that her family was able to “escape” but acknowledged “there’s a little guilt aspect.”

“Those families’ lives are changed forever, and I hope that somehow people will find a way to be OK,” she said. “Because this was tragic for a lot of people. We are very, very fortunate.”