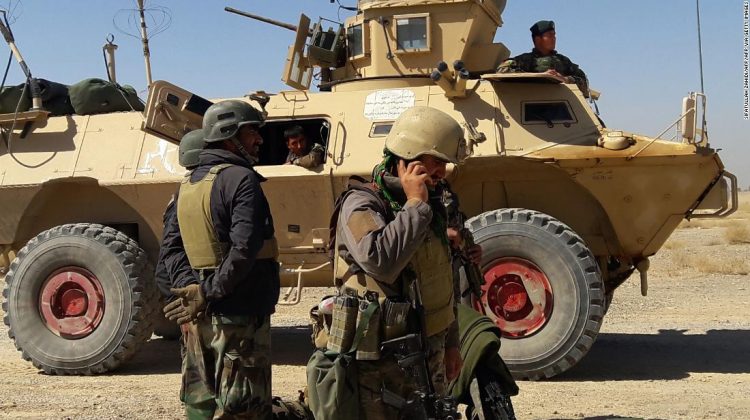 Now, the militants are back at the city gates once again, as part of a lightning offensive against Afghan government forces that has set alarm bells ringing from Kabul to Washington.

One by one, the Taliban has been taking over areas in a number of provinces in northern Afghanistan in recent weeks, local officials told CNN. The Taliban says it has taken control of 90 districts across the country since the middle of May. Some were seized without a single shot fired.

The UN’s special envoy on Afghanistan, Deborah Lyon put the figure lower, at 50 out of the nation’s 370 districts, but told the Security Council on Tuesday she feared the worst was yet to come.

“Most districts that have been taken surround provincial capitals, suggesting that the Taliban are positioning themselves to try and take these capitals once foreign forces are fully withdrawn,” Lyon said.

The dire warnings come just two months after President Joe Biden announced that US and NATO troops would withdraw from Afghanistan by September 11.

Leaving was never going to be pretty, but the latest turn is uglier than expected. While the plan was cooked up by the Trump administration, the unseemly consequences are landing in Biden’s lap before the pullout has even been completed.

On a map, it’s easy to see the point Lyon is making. A stark example is Mazar-i-Sharif, the biggest city in the north and a significant power center in its own right.

Look around it to districts the Taliban have taken: In Faryab province, southwest of Mazar; in Balkh province, surrounding it to the north; and in the provinces of Kunduz and Takhar to the northwest and west. The militants are circling the city like lions.

An Afghan commander sent hundreds of soldiers to secure all gates to the city Monday. The Taliban’s tactics are designed to strike fear into Afghan hearts, weaken the army’s morale, and cripple and ultimately disintegrate the power of the state.

Already the country’s diverse ethnic communities, from Hazaras to Uzbeks to Tajiks, are looking to defend themselves from the onslaught of Taliban attacks.

Ata Mohammad Noor, a former warlord and ex-governor of Balkh, the province home to Mazar-i-Sharif, has urged his predominantly Tajik group Jamiat-e-Islami– which fought the Taliban as part of the Northern Alliance in the 1990s — to take up arms again.

“I call upon all the commanders and devoted soldiers of Jamiat-e-Islami across the country to stand alongside the Afghan security forces to defend their land and their people,” he tweeted earlier this week.

“The Taliban are moving rapidly, resulting in a swift deterioration in the security environment. We were caught off-guard by the scale and scope of setbacks in the north. The Taliban are exploiting fear and using terror to accelerate their control of the region. Their infiltration of the provincial capitals comes at a harrowing moment for my country,” negotiator Habiba Sarabi told CNN on Wednesday.

During the 1990s, I covered the Taliban’s rise to dominance, from their capture of Kabul in late 1996 to the day of their undoing on September 11, 2001, when their guests in Afghanistan — the terrorist group al Qaeda — brought down the World Trade Center’s twin towers. I stood in the capital that night as Northern Alliance commanders flew daring raids into Kabul airport. They were the last holdouts against the Taliban.

That’s why it’s significant the Taliban are kicking off this offensive in the north, not their heartland in the south and east. The north was the toughest part of the country for them to crack last time. Their expectation is if they have victory there, success will flow much easier in their traditional homelands further south.

The strategy of taming the north extends to emasculating and profiting from trade routes to neighbors. On Monday night they captured the important border town of Shir Khan Bandar, Afghanistan’s main crossing into Tajikistan. Earlier in the day, top Tajik government officials had met to discuss concerns about the growing instability next door.

There is no indication that the Taliban intend to take their fight north of the border, but in the past Tajikistan has been a vital conduit for supplies flowing to the militants’ northern enemies.

America’s drawdown seems to be the gamechanger. The Taliban have been beaten back several times in recent years, notably from Kunduz in 2015. The Taliban captured it briefly before US airstrikes were called in. Civilian casualties were high but the militants were driven out.

The militant group has never been able to withstand the heavy US and NATO air assaults backing Afghan ground forces, but now the US and NATO are leaving, so is much of the threat of sophisticated and sustained air power. And the Taliban are well aware of this.

Recent Taliban videos from their latest offensive reveal that in some cases they are winning without firing a shot.

One cell phone recording shows the surrender of an Afghan army convoy of American-made armored Humvees. The Afghan soldiers throw their guns in an untidy pile as another of their number takes down the national flag from one of the vehicles. The Taliban move in to claim their prize: Fast-moving, relatively safe firepower, the likes of which no country would sell them.

The US ambassador to the UN warned the Taliban on Tuesday that a military victory would not be recognized. The militants’ perceived desire for international recognition has been the mantra underpinning the American exit.

The logic of the American argument was simple: The Taliban wouldn’t renege on their agreements with the US because they crave international acceptance. The events of this past week appear to blow a hole in that assumption.

On Friday, Afghan President Ashraf Ghani is set to meet with Biden at the White House. What he is unlikely to get from the world’s most powerful man is a mea culpa — nor the troops and airpower to counter the Taliban’s bad faith.