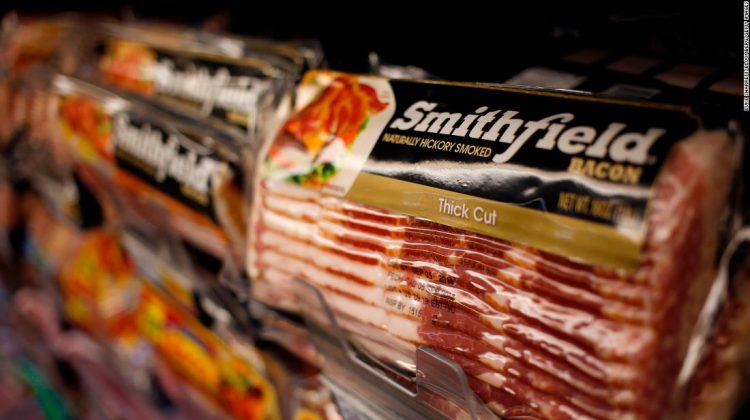 Smithfield temporarily closed some of its facilities as workers got sick with Covid-19 early on in the pandemic.

As the company took certain plants offline, it warned that the consequences for the country’s meat supply could be dire. In April 2020, for example, Smithfield’s then-CEO Kenneth Sullivan said in a statement announcing the closure of Smithfield’s Sioux Falls plant that the country is “perilously close to the edge in terms of our meat supply.”

But those fears were overblown, according to a lawsuit filed Wednesday in Washington, D.C. by Food & Water Watch (FWW), a non-profit consumer advocacy group. Even as Smithfield warned of a meat shortage, the company was exporting pork outside of the country, the complaint said.

The lawsuit also cited government data, which showed the US pork inventory in cold storage “was well into the hundreds of millions of pounds.” Analysts estimated such an inventory would keep grocery stores supplied for “months,” the lawsuit stated.

When asked for comment, a Smithfield representative directed CNN Business to seek comment from two industry groups, the National Pork Producers Council and the North American Meat Institute and highlighted a May 2020 news article, which said millions of pigs would have to be euthanized as meatpacking plants were hit hard by the pandemic.

The representative also offered a statement around mid-day from Keira Lombardo, chief administrative officer at Smithfield. She said, “we have not been served with a copy of this purported complaint and have not had adequate time to review the allegations or prepare any substantive response to them,” but added that “the advocacy organizations who make these claims have a stated goal of dismantling the efforts of our hard-working employees, who take great pride in safely producing food products.”

FWW filed the suit on behalf of itself, DC consumers and the general public, it said in the complaint, pointing to a D.C. law that allows non-profits to sue on consumers’ behalf

“Smithfield’s public messaging amounted to a scaremongering campaign, exploiting consumer fear about food insecurity,” FWW said in the complaint. “These statements, however, were misleading, deceptive, and contradicted by the facts.”

The company also told consumers in ads and on social media that it was implementing proper safety procedures for its workers during the pandemic, the complaint noted.

But those measures were insufficient, FWW alleged, pointing to fines and citations against Smithfield plants from the Occupational Safety and Health Administration over the company’s failure to protect its employees from exposure to the coronavirus. Smithfield pushed back on one such citation in September. Lombardo, who was then the company’s VP of corporate affairs and compliance, told CNN at the time that “this OSHA citation is wholly without merit and we plan to contest it.”

The June 16 complaint also states that workers reported attendance policies that encouraged employees to come in even if they were sick.

“To be clear, our health and safety measures, guided by medical and workplace safety expertise, have been comprehensive as our teams have worked from coast to coast to protect the food supply during the pandemic,” Lombardo said in her Monday statement.

Early in the pandemic, cramped meatpacking facilities emerged as coronavirus hotspots. Earlier this year, a panel of House representatives launched an investigation into how major meat processors and OSHA handled coronavirus outbreaks at meatpacking facilities. In response to the investigation, spokespeople for Tyson (TSN), Smithfield and JBS USA said the companies looked forward to working with the subcommittee.