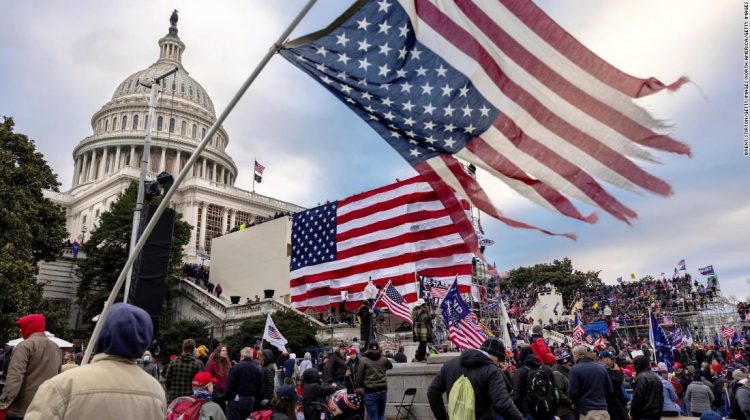 On Wednesday, a federal judge named Royce Lamberth had had enough. Lamberth used the first sentencing hearing for a defendant charged in the attack on the Capitol to blast Republicans trying to cast January 6 as anything other than a violent riot aimed at stopping the wheels of democracy from turning.

“I’m especially troubled by the accounts of some members of Congress that January 6 was just a day of tourists walking through the Capitol,” Lamberth said. “I don’t know what planet they were on. … This was not a peaceful demonstration. It was not an accident that it turned violent; it was intended to halt the very functioning of our government.”
Lamberth, who was appointed to his judgeship by the late Republican president Ronald Reagan, added that newly released videos from inside the riot that day “will show the attempt of some congressman to rewrite history that these were tourists walking through the capitol is utter nonsense.”

The likes of Wisconsin Sen. Ron Johnson and Georgia Rep. Andrew Clyde have actively attempted to suggest that the media coverage of January 6 has painted an inaccurate picture of what happened that day.

“This didn’t seem like an armed insurrection to me,” Johnson said in February. Clyde said in May that the insurrection looked like a “normal tourist visit” to him.

Even House Minority Leader Kevin McCarthy has gotten in on the whitewashing of that day — and Trump’s role (or lack thereof) in it.

Here’s McCarthy describing what happened on January during an interview with Fox News Channel in late April:

“What I talked to President Trump about, I was the first person to contact him when the riots was going on. He didn’t see it. What he ended the call was saying — telling me, he’ll put something out to make sure to stop this. And that’s what he did, he put a video out later.”

Which is, uh, not exactly what happened. Here’s what did happen, via reporting in February from CNN’s Jamie Gangel, Kevin Liptak, Michael Warren and Marshall Cohen:

“Speaking to the President from inside the besieged Capitol, McCarthy pressed Trump to call off his supporters and engaged in a heated disagreement about who comprised the crowd. Trump’s comment about the would-be insurrectionists caring more about the election results than McCarthy did was first mentioned by Rep. Jaime Herrera Beutler, a Republican from Washington state, in a town hall earlier this week, and was confirmed to CNN by Herrera Beutler and other Republicans briefed on the conversation.”

Lamberth made clear this week that he wouldn’t stand for that junk — blasting as “conspiracy theories” the idea that the FBI was somehow involved in the riot. (He also had a warning for those future defendants in the cases being brought by the Justice Department for the violence on January 6; “Some of my defendants in some of these other cases think there’s no consequence to this, and there is a consequence,” he said. “I don’t want to create the impression that probation is the automatic outcome here, because it’s not going to be.”)

Lamberth’s frank talk is a reminder — or at least should serve as one — that there isn’t a factual debate about what happened at the US Capitol on January 6.

A group of people, egged on by Trump and his loyalist allies, attempted to block the certification of the Electoral College vote. They did so because they had been fed a lie — by Trump and other GOP leaders as well as conservative media — that there was some sort of valid claim that the 2020 election had been fraudulent. They overwhelmed the US Capitol Police, often using violent means, and marauded through the home of the US Congress.

These are FACTS. They are NOT in dispute. We need to keep saying that because truth matters.