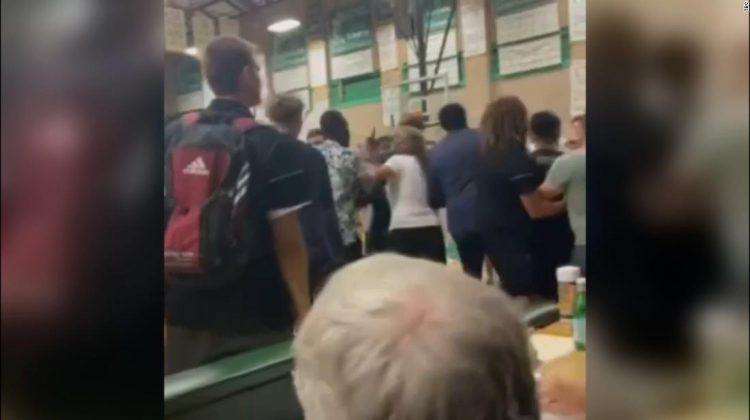 The Coronado Unified School Board voted 5-0 on Tuesday night to release JD Laaperi, the head basketball coach at the San Diego-area Coronado High, according to Kami McElligott, an executive assistant to the district’s superintendent and board.

The board did not comment further on the reasoning behind Laaperi’s firing, but the decision took place during a special meeting called to address Saturday’s incident

Laaperi tweeted Saturday that he did not condone the actions of the person who brought the tortillas to the game and distributed them, saying it was “unacceptable and racist in nature.”

CNN has reached out to Laaperi for comment about the board’s decision.

The board’s decision comes days after some people threw tortillas into the air as an altercation ensued at the end of a division championship game on Saturday between Coronado High and Orange Glen High, a predominantly Latino school in nearby Escondido. The incident was captured on video by bystanders and the National Federation of State High School Associations (NFHS) Network, which was livestreaming the game.

The incident has drawn criticism from school district officials, civil rights organizations and state lawmakers, who described the incident as “a glaring example of racism.”

“This goes beyond a teaching moment — it’s a glaring example of racism from students who are old enough to know better,” leaders of the California Latino Legislative Caucus said in a statement.

The Coronado Police Department said officers were called Saturday to assist school staff in clearing the gym of game spectators. When officers arrived, they were told that tortillas had been thrown at the opposing team and the officers later identified a man they believed brought the tortillas to the game, police said.

Coronado Unified School District Superintendent Karl Mueller apologized to the Orange Glen community in a statement released on Sunday, saying that those who participated in the incident do not reflect the school district’s values. Ahead of Tuesday’s decision, Mueller said the district plans to work with the Escondido Union High School District to coordinate experiences to “bring students together and facilitate restorative meetings designed to learn and heal from the incident Saturday night.”

“The student athletes were giving it all on the court only to have what should have been a celebratory event devolved into an unthinkable experience,” Staffieri said in a statement on Tuesday.

Police and school officials have not publicly identified those who were spotted throwing the tortillas. Video footage of the incident appears to show at least two people doing so.

Shock and accusations of racism

“I was just shocked, I was disappointed that’s their idea of a joke or whatever their reason for doing it… they are just racist,” Rivera said.

Lizardo Reynoso, assistant basketball head coach at Orange Glen, told CNN the altercation began when one of the opposing team coaches approached their bench shouting expletives at his team. Shortly after, Reynoso noticed the tortillas.

“It took us a minute to realize that they were trying to send a kind of racial hatred message to us,” the assistant coach told CNN.

As a Mexican American, Reynoso said, he quickly became upset but focused his energy on encouraging players to keep their “heads up” and remind them that they shouldn’t be embarrassed of their performance through the season.

Domingo Garcia, national president League of United Latin American Citizens (LULAC), said “the act of throwing tortillas was meant to perpetuate the worst kind of racist reaction” against athletes, coaches and their families and dismissed the idea that it was planned as a “celebratory action.” For years, Texas Tech football fans have thrown tortillas into the field to confuse opponents during games.

“LULAC will not accept this behavior as the new normal in America and acts of racial hate directed at Latinos will not be condoned or dismissed as kids-will be kids,” Garcia said.

During the special board meeting on Tuesday, members of the Coronado school district condemned the incident. Esther Valdes-Clayton, a Coronado Unified trustee, said Latinos couldn’t ignore the symbolism of the tortillas.