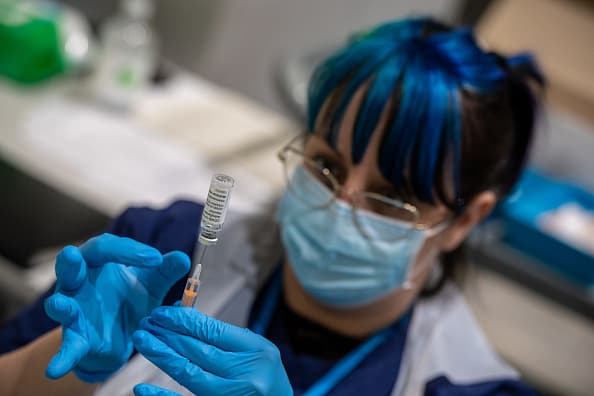 Covid vaccinator, Petra Moinar, prepares syringes with the AstraZeneca vaccine before it is administered at Battersea Arts Centre on March 8, 2021 in London, England.

LONDON — England’s top medical officer has warned that the coming winter will continue to be difficult for the country’s health system despite the country’s successful coronavirus vaccination program.

A further easing of lockdown restrictions in England was delayed this week due to a surge in cases of the delta variant first discovered in India.

In a speech to the NHS Confederation Thursday, Chief Medical Officer Chris Whitty said the current wave of Covid infections due to the delta variant would likely be followed by another surge in the winter.

He said that Covid-19 “has not thrown its last surprise at us and there will be several more [variants] over the next period,” according to Sky News. He added that it would likely take five years before there are vaccines that could “hold the line” to a very large degree against a range of coronavirus variants.

And until then, he said that new vaccination programs and booster shots would be needed.

In the U.K., where the delta variant is now responsible for the bulk of new infections, cases have spiked among young people and the unvaccinated, leading to a rise in hospitalizations in those cohorts.

It’s hoped that Covid-19 vaccination programs can stop the spread of the delta variant and so the race is on to protect younger people who might not be fully vaccinated.

Analysis from Public Health England released on Monday showed that two doses of the Pfizer–BioNTech or Oxford-AstraZeneca Covid-19 vaccines are highly effective against hospitalization from the delta variant.

But some vaccines are reported to be less effective against other strains. For example, British Health Secretary Matt Hancock said earlier this month that it has started commercial negotiations with AstraZeneca to secure a variant vaccine — which has been adapted to tackle the variant first discovered in South Africa.

Meanwhile, trials of booster shots are already underway in Britain and there are reports that the population will receive a third shot before winter this year.