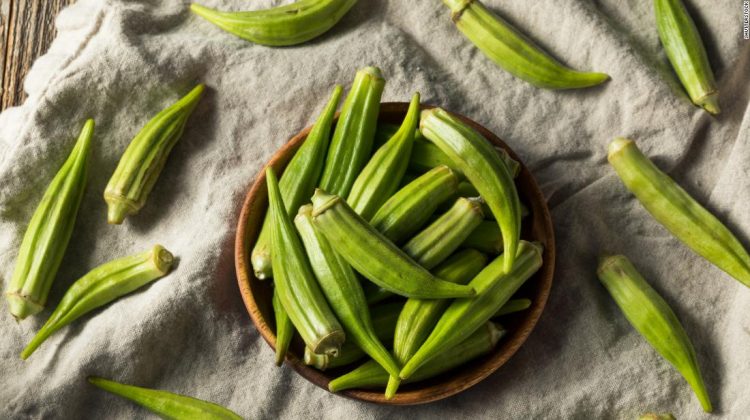 Most people who think they don’t like okra fall into two categories, according to Sheri Castle, author of “The New Southern Garden Cookbook” and self-proclaimed okra lover.

“They either have never had it but have heard the horror stories, or tried to cook it and had such a bad outcome that they were afraid to try it again,” she said.

Please don’t put okra on the canceled list. This sometimes frustrating and amusingly shaped food — which is actually the seed pod of the okra plant — deserves a second chance.

Okra originated in Africa, traveling along historic trade routes to South Asia and the Middle East before arriving in the Americas via enslaved people. Because of its long and globe-trotting history, you’ll find okra as an ingredient in everything from gumbo in the US South to Japanese tempura.

Okra’s taste is mild and grassy, “which means it’s a good choice for putting flavorful things on it,” Castle said. She compares its texture to that of asparagus or green beans, and like those two vegetables, okra can be transformed to suit your taste.

It’s good for you, of course

Not that you expected okra to be high in fat or cholesterol or calories, but it is most certainly none of those things.

One cup of okra (about 8 pods) gives you 3 grams of fiber, which is more than you’ll get in an equivalent amount of cauliflower or brown rice. It’s also a good source of vitamins A and C and folate, as well as low in carbs.
Okra has historically been a folk remedy for diabetes, and studies have shown that the plant can have a positive effect, decreasing blood sugar levels and inhibiting cholesterol production.

If the “slime factor” has turned you away from okra in the past, there’s one simple way to avoid it altogether: Cook your okra whole.

Cutting into okra releases the mucilage, a natural sugar-protein substance that thickens when heated. Leaving okra whole keeps the mucilage inside, so “if you never pull the plug, you’re halfway there,” Castle said.

And if you love shishito peppers, you should give blistered okra a try. Whether seared in a skillet, oven-roasted, grilled or air-fried, the method for prepping whole okra is the same. Pat the okra pods very dry, then toss with olive oil and a pinch of salt and pepper.
After the pods are charred and softened in spots, they’re ready for the seasoning of your choice. Try a dipping sauce like a smoky paprika-shallot dip or sprinkle on a spicy chili-garlic blend

You can still get around the “goo” issue

There’s no need to restrict yourself to only eating whole okra, however. Once you’ve mastered that method, it’s time to get into the deep cuts — okra cuts, that is. First, make sure the okra is very dry before slicing, because wet okra is the first cause of gooey, soggy okra.

Castle’s recommendation for cooking dishes that call for sliced okra is to sauté the okra on its own before adding other ingredients. “Let them cook very gently for about 3 minutes before you stir,” she said, “which is long enough for the heat to set the saccharides” in the mucilage.

Try this recipe for charred okra succotash salad with sliced rounds of larger okra pods instead of small whole okra. You can also pre-cook okra in this way and freeze the sautéed okra to add to recipes down the line without worrying about getting slimed.

It can be even more versatile

Okra is an ideal ingredient for carrying on the great tradition of pickling your summer produce. Pickle the pods whole in an easy spiced brine, or use a dilly bean pickle recipe with okra for a refreshing change.
For snacking, okra has two ways of giving you crunchy satisfaction. Make homemade crispy okra chips (in the style of the elusive, out-of-stock Trader Joe’s “crispy crunchy okra”) in your oven or a food dehydrator. Bonus: they’re also delicious as high-fiber salad croutons.

For an even more unusual treat, you can eat the seeds as “okra caviar,” as it’s known in the South. Scrape the seeds out of large okra pods, which can be too woody and tough to cook and eat on their own. Cook in boiling water for a few minutes, then transfer with a mesh strainer to a bowl of ice water to blanch the seeds before eating.

It makes your garden even more beautiful

“Okra is so beautiful, you could grow it as an ornamental,” Castle said. As part of the mallow plant family, okra is botanically related to cotton, hibiscus and hollyhocks. Its flowers actually resemble those of the hibiscus plant, with pale petals ringing a deep crimson center. They’re edible as well, and make a dramatic addition to a summer salad.

Once the flowers fall off the plant, the pods will begin to grow and ripen, so you can reap the benefits of the harvest.

And once you have those okra pods, you’ll have more than five reasons to cook them up for friends and family.

Casey Barber is a food writer, illustrator and photographer; the author of “Pierogi Love: New Takes on an Old-World Comfort Food” and “Classic Snacks Made from Scratch: 70 Homemade Versions of Your Favorite Brand-Name Treats;” and editor of the website Good. Food. Stories.